Product integrated lighting solutions connect people and technology. When we think of light we often think of design and forget the great communicative added value that lighting solutions provide: from simple status displays to complex control elements. Classical lighting functions can be expanded with new colours and functionalities and enable intuitive understanding and use. Whether household appliances, industrial plants or products intended for use in public areas – here we’re presenting to you a selection of MENTOR credential projects from the field of non-automotive lighting solutions.

Application examples from the field of lighting solutions 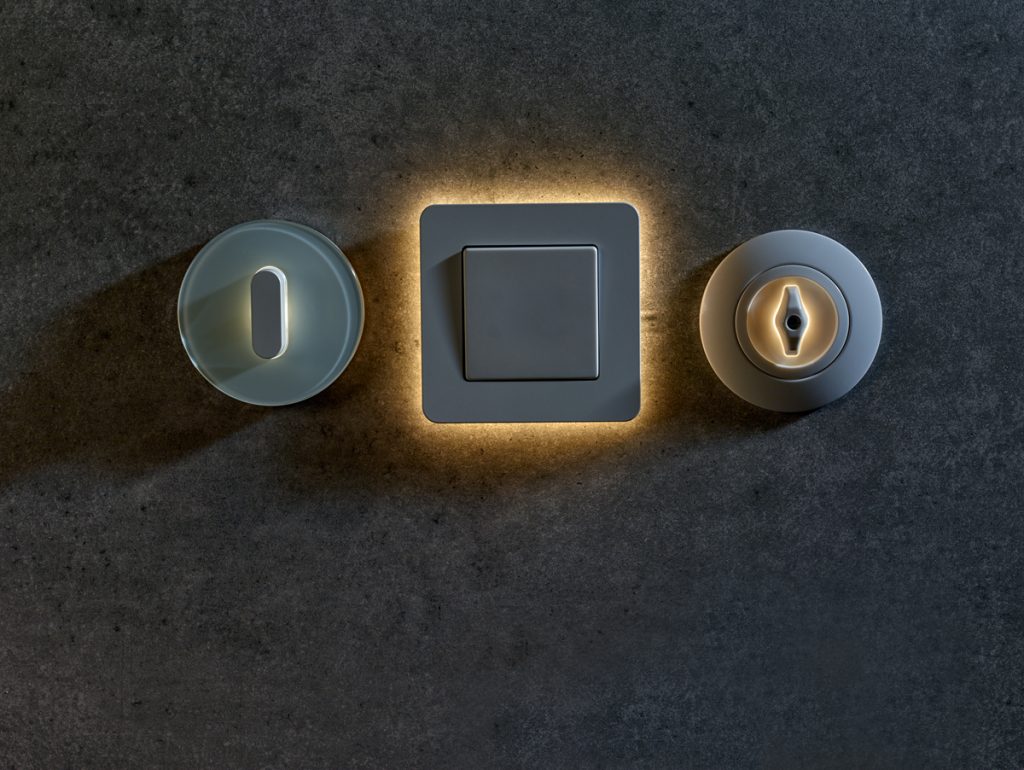 The Berker design series redefine the term light switch. The company, which belongs to the Hager Group, added illumination to various frames or switches lighting directly into several series from the premium segment. In cooperation with MENTOR, Berker now presents 4 design lines in the best light. 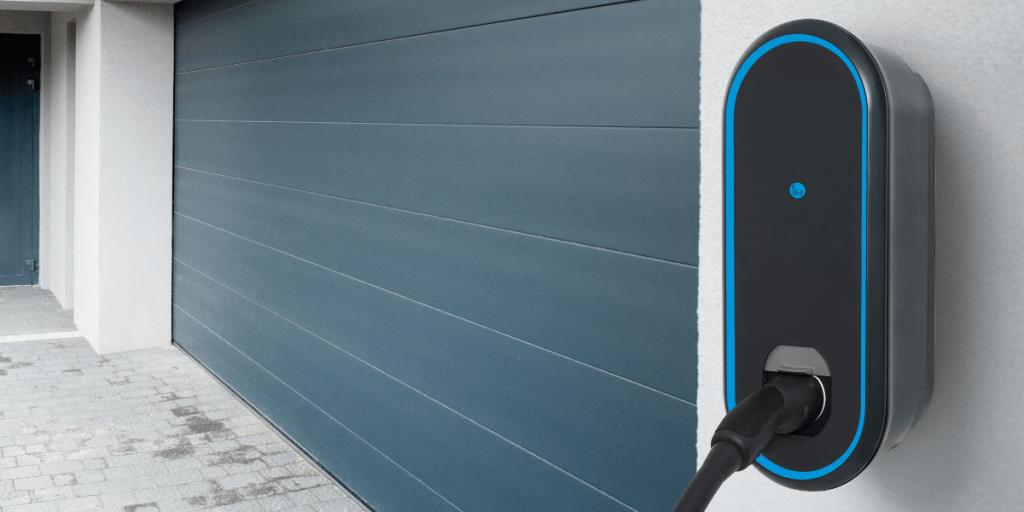 Transportation concepts for the future – we all long for a safe and clean world of tomorrow. Innogy generates energy from renewable sources and makes sure that the electricity reaches you. 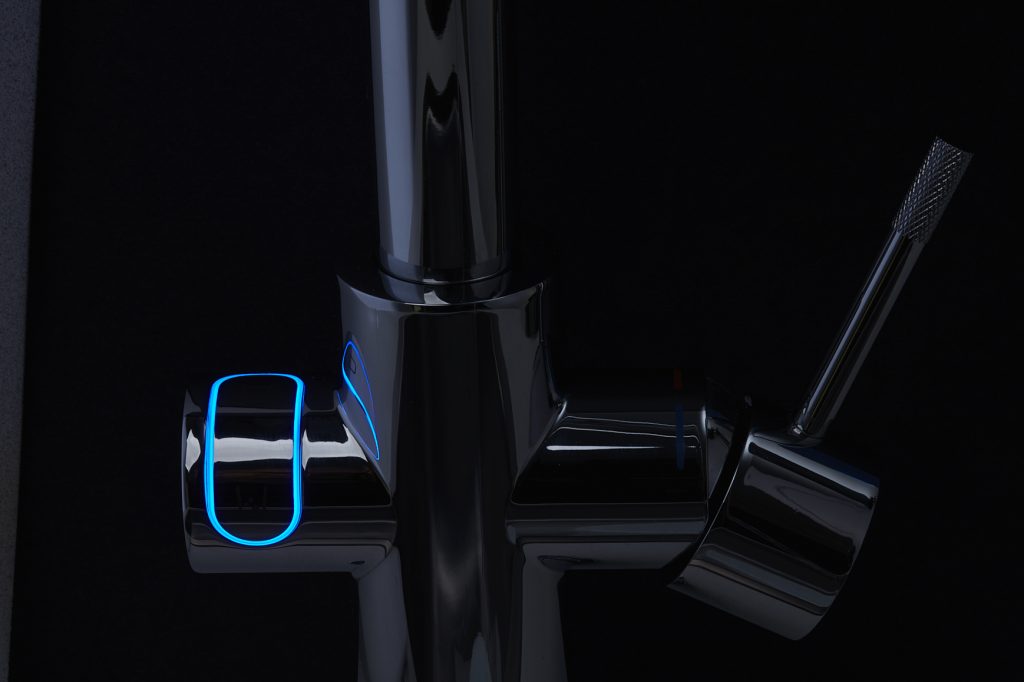 Grohe is one of the leading global brands for integrated bathroom solutions, kitchen fittings and innovative sanitary products. 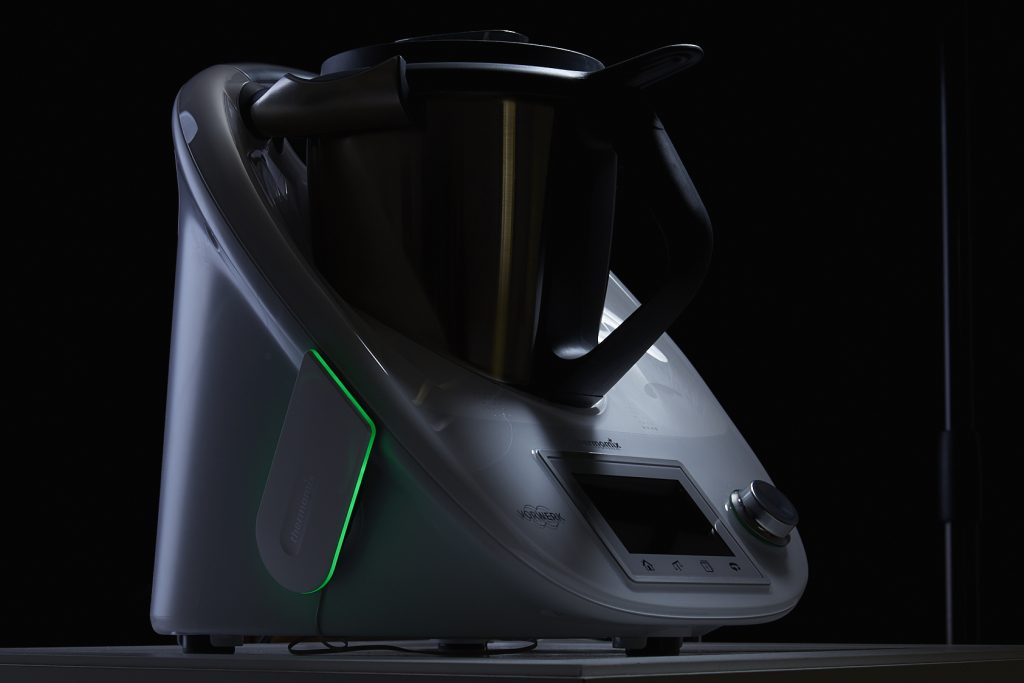 Vorwerk, the family business from Wuppertal, is successful worldwide with high-quality cult products such as the Vacuum Cleaner Kobold or the smart Thermomix / Bimby food processor. The  TM5 features a special gadget: Cook-Key, which connects the device via WIFI to the online recipe portal Cookidoo. Since Vorwerk pays attention to highest quality in all product components, they trusted in the competence of MENTOR for the development and production of the integrated light guide system. The result: a perfectly homogeneous ring of light all around in bright Vorwerk green signals to the user that the recipes have been transferred to his Thermomix. 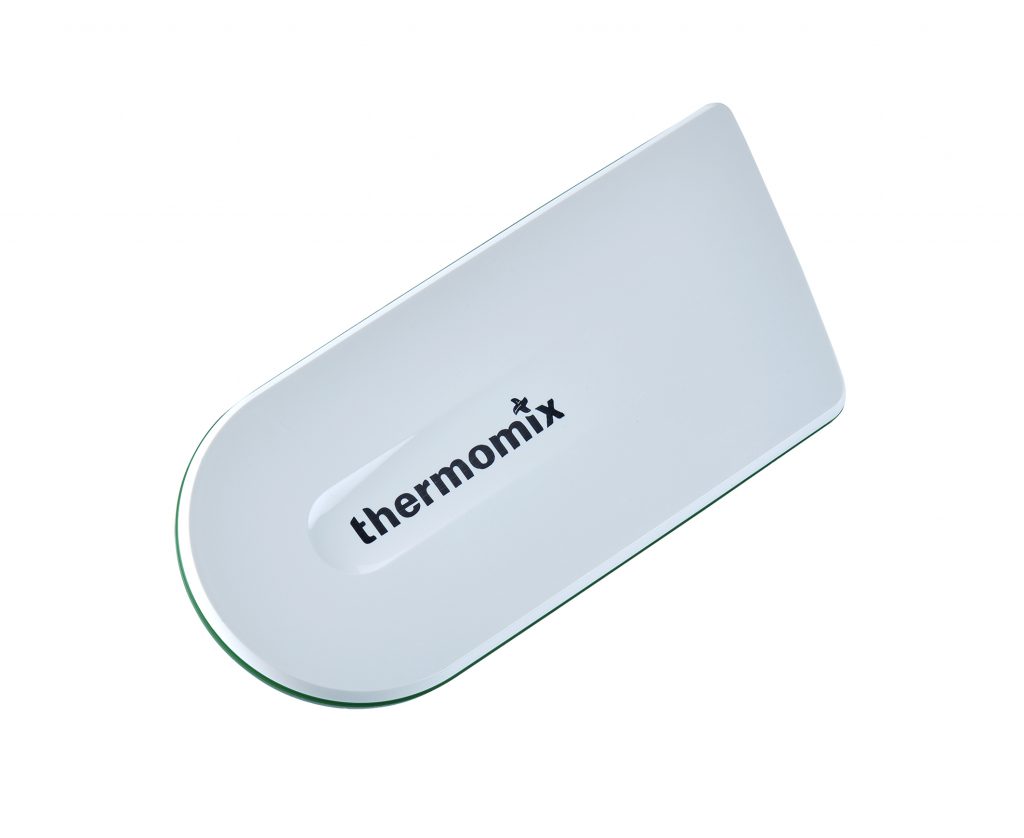 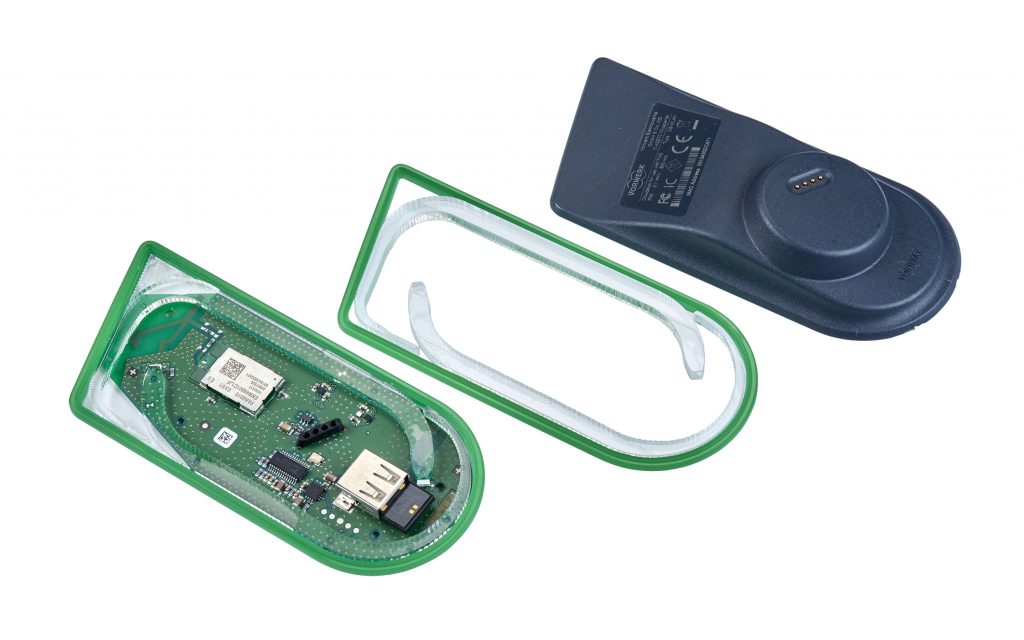 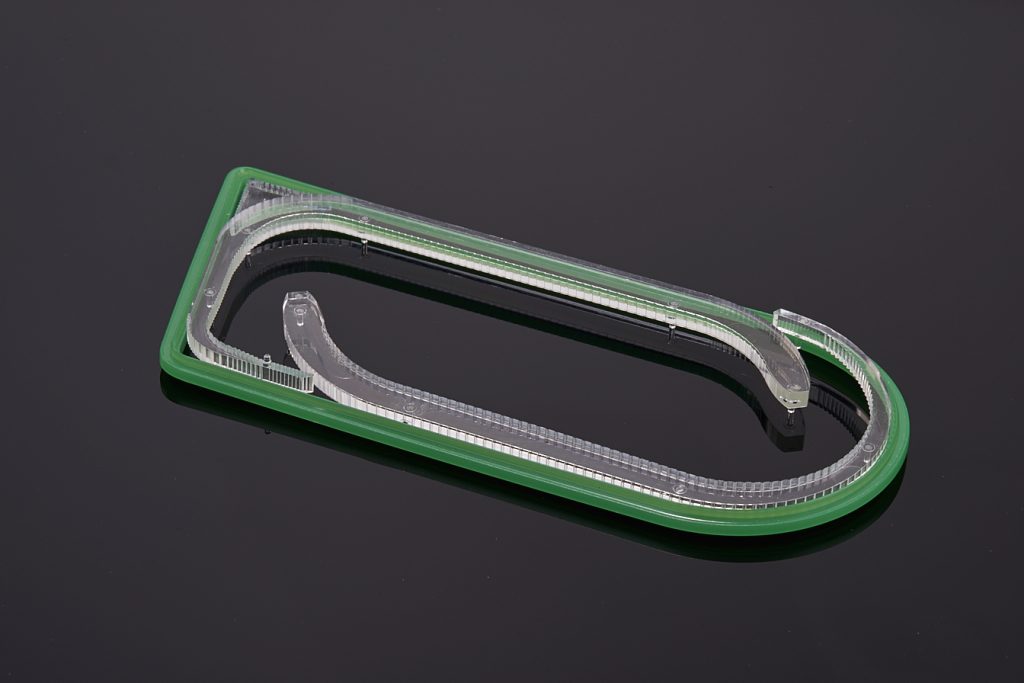 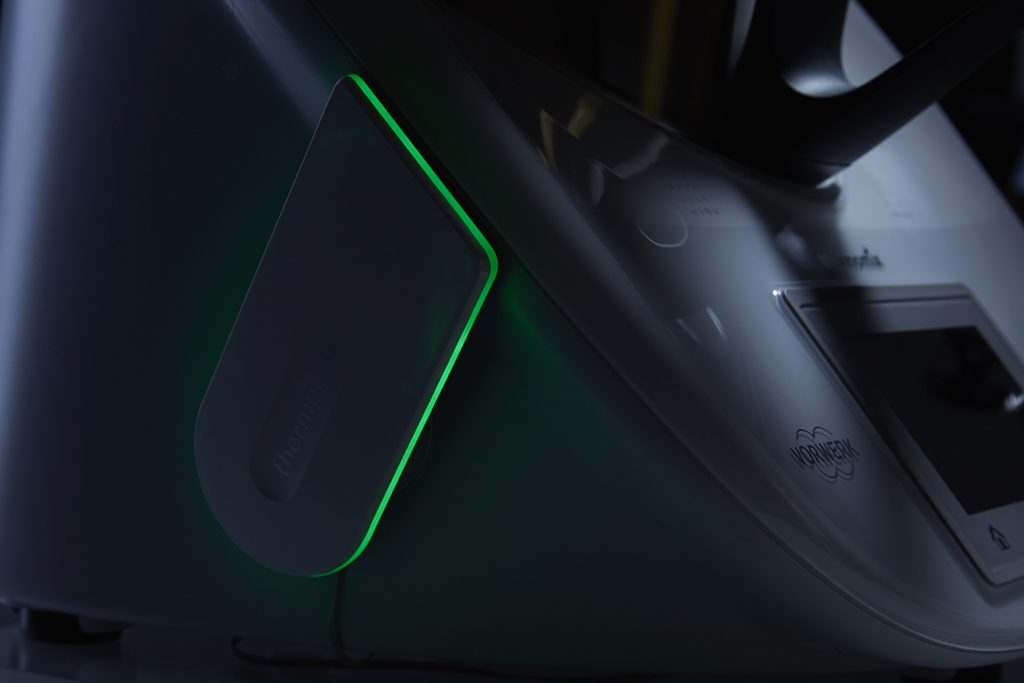 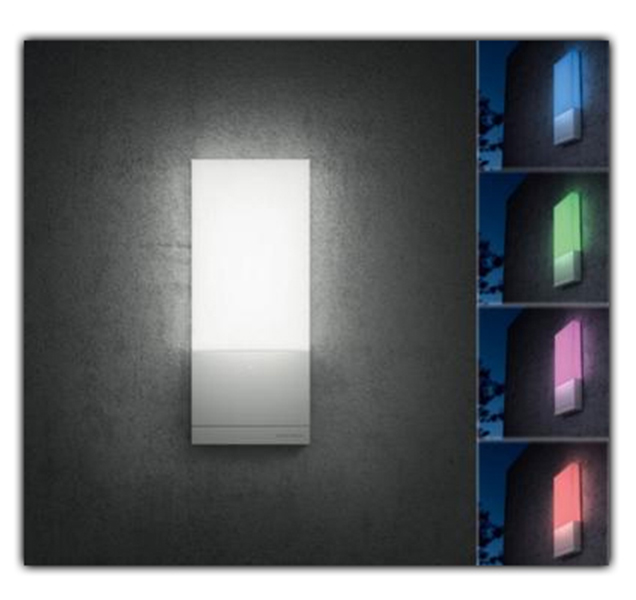 For almost 150 years Busch-Jaeger has been renowned for its innovative products for close to 150 years. Design and functionality characterise the product portfolio. The company has an active cooperation with MENTOR, and has realised many award winning products with MENTOR lighting solutions, i.e. the wall modules Busch iceLight and Busch Masterlight.
The Busch-MasterLight® is an innovative light for the entrance door. With the highest standards of design, function and light quality. With its 200,000 micro-prisms, computer-calculated in shape and position, the integrated surface light guide developed for this purpose enables perfectly homogenous and directed light distribution.
Busch-Jaeger also relied on a customised solution from MENTOR for the wall modules ambience and orientation of the LED light series Busch-iceLight® designed by Hadi Teherani. A modular system with refractive and reflective optics is used here. From concept to development, visualization, tool construction and production, MENTOR realizes solutions like these from one source. 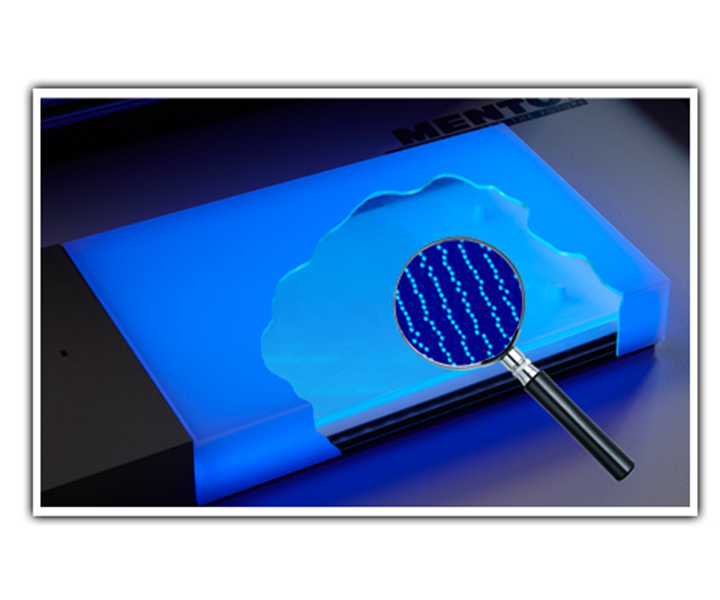 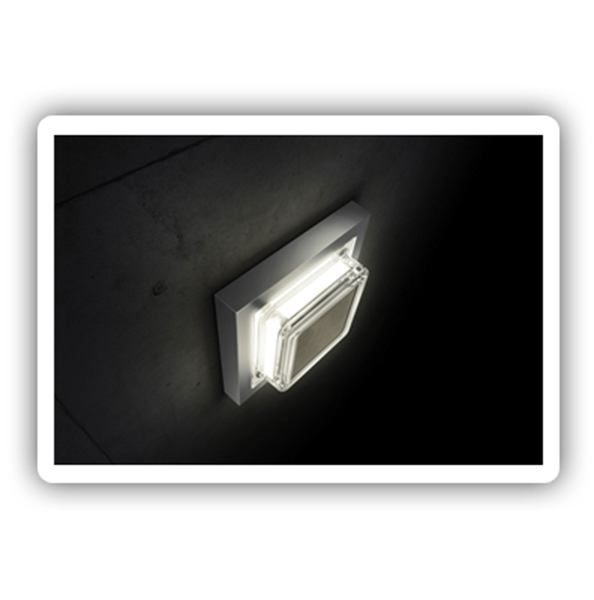 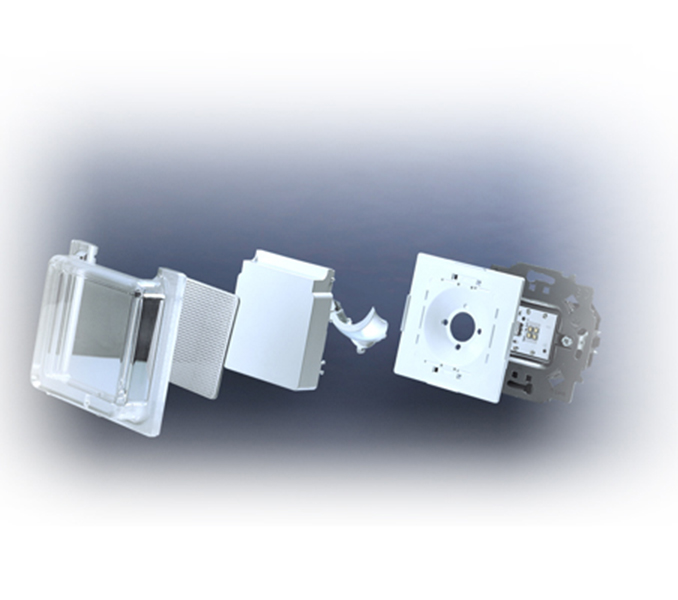 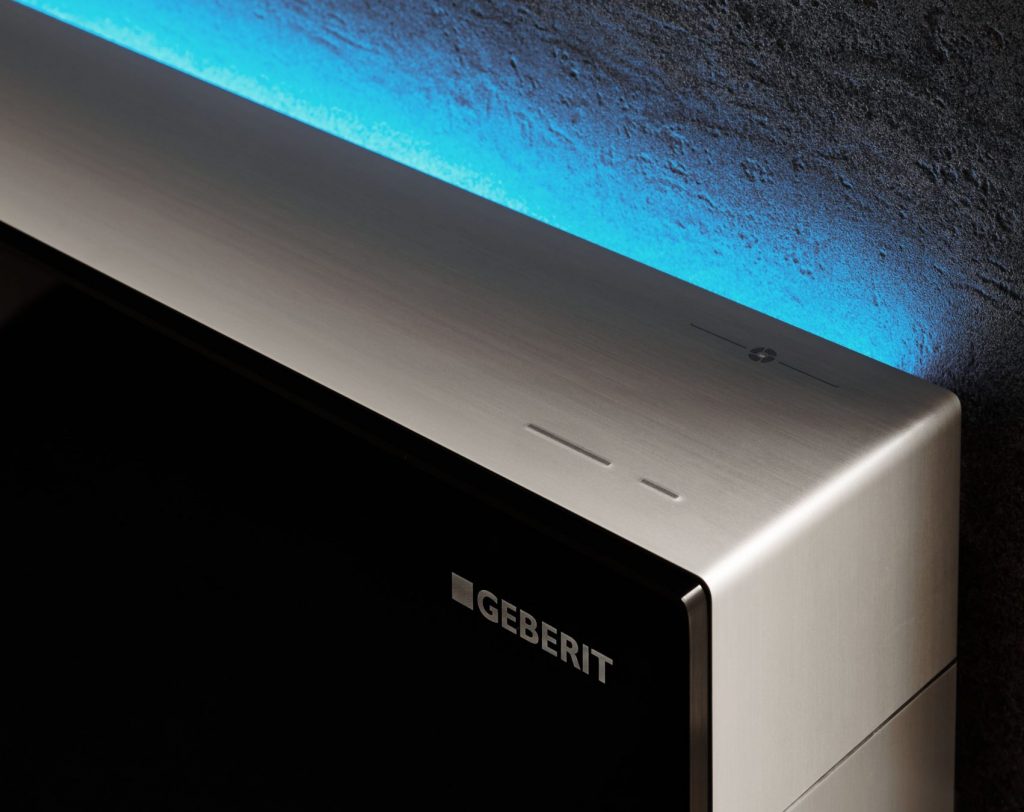 Light as a design element: offering orientation, Ambience and functionality. In this case: homogeneous lighting and an innovative visualisation of a fan function. In the innovative toilet module Monolith Plus, Geberit, market leader and trendsetter in sanitary technology, shows how light offers functional and emotional added value in an impressive way. The perfect homogeneity of light is made possible by a customized lighting solution with additive reflector coating from MENTOR. 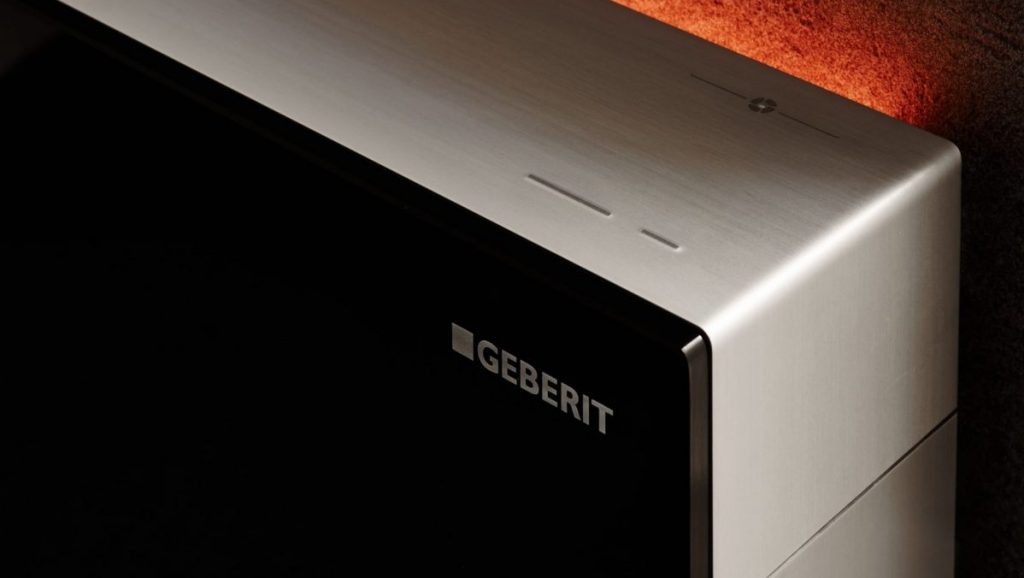 Ambient and functional light in the Geberit Monolith Plus sanitary module 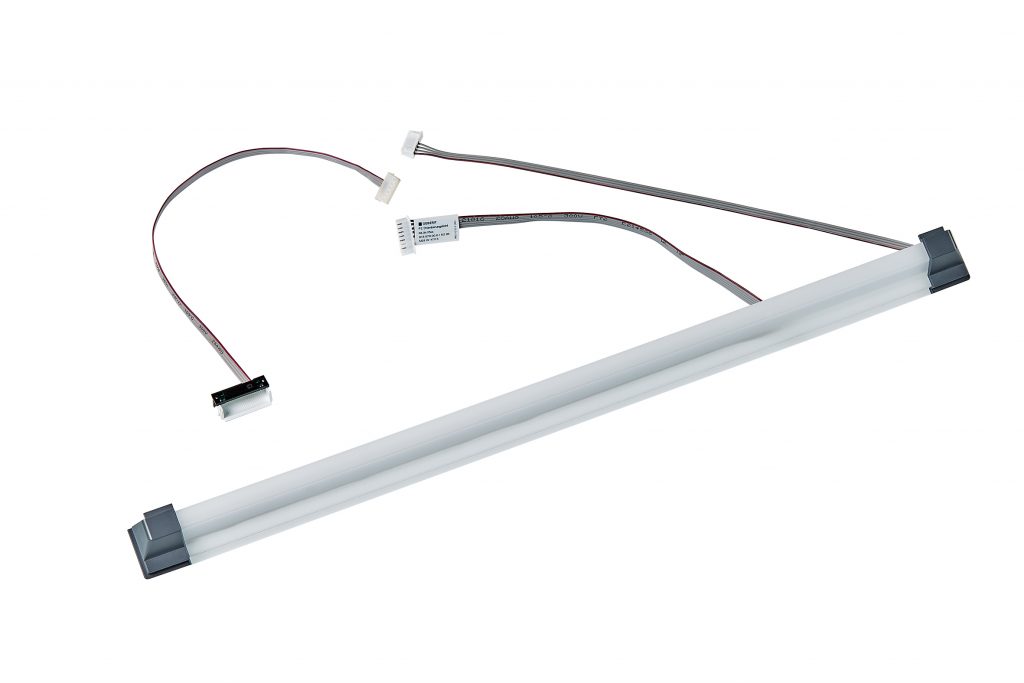 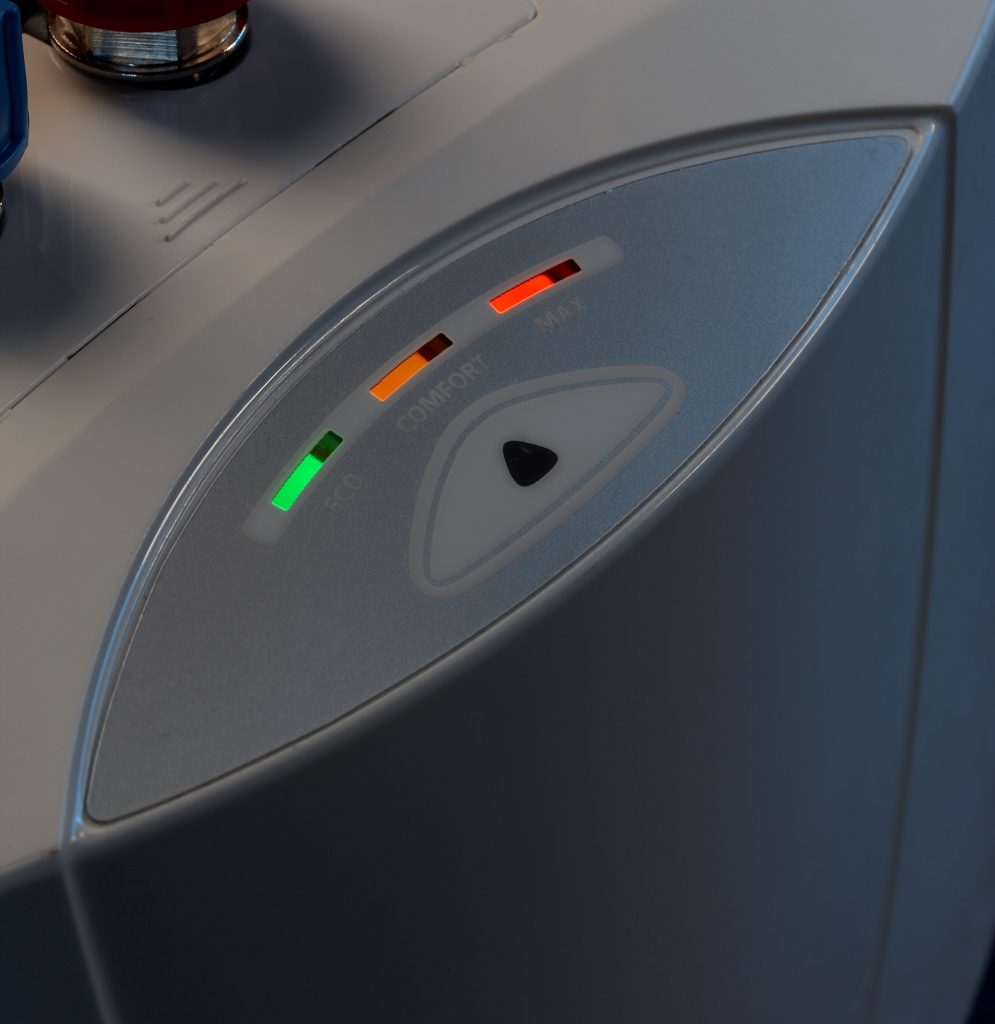 The Lüneburg-based industrial company Clage is one of the leading German manufacturers of instantaneous water heaters and offers hot water appliances for all kinds of applications. The small instantaneous water heater model MCX Clage features a light guide made by MENTOR. The light guide with a special reflector coating was developed especially for this device. It is only one millimeter thick and enables an illuminated status display in the smallest installation space. 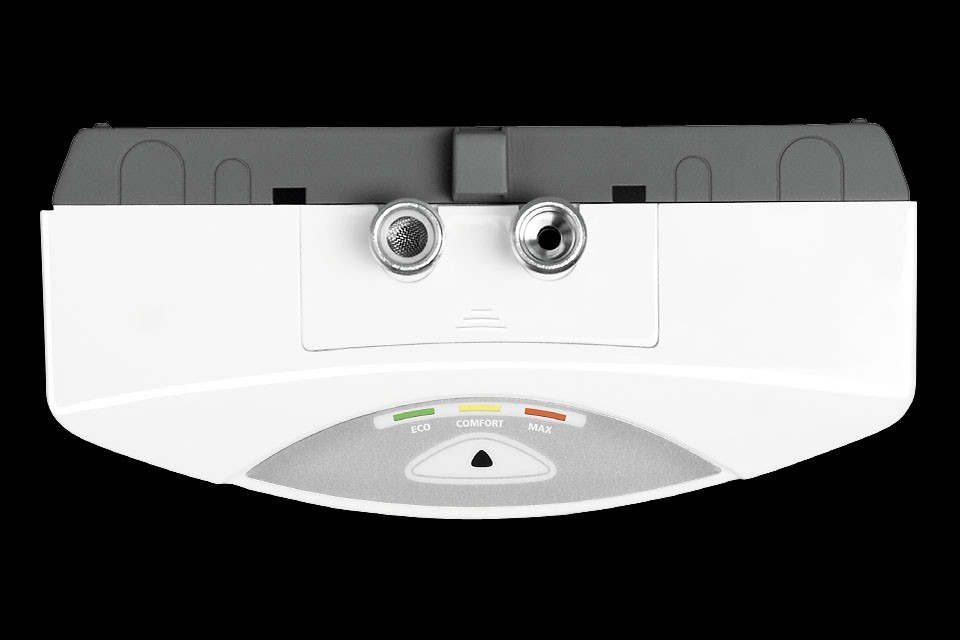 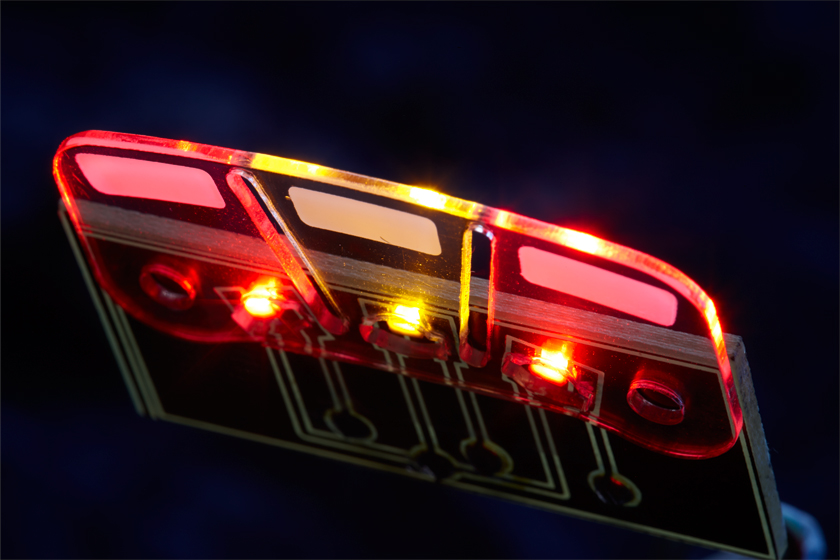 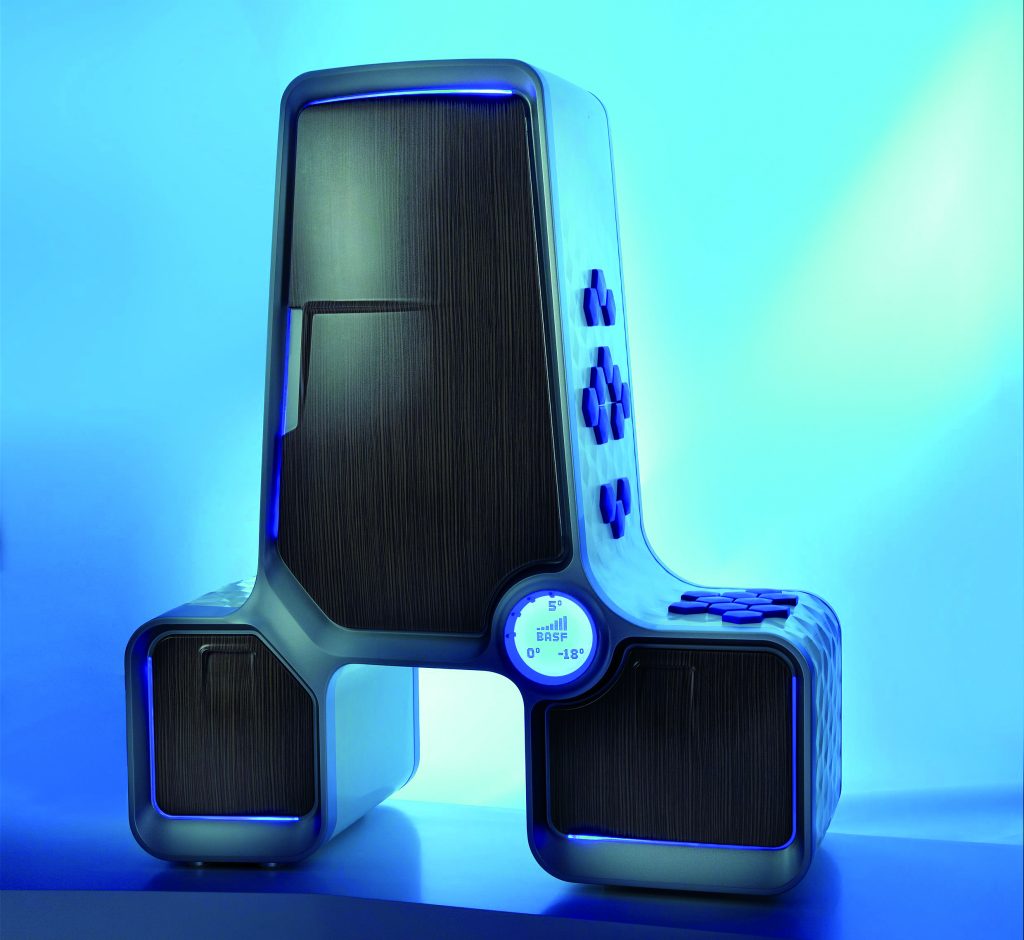 Inspired by a bicycle from 1865, the year BASF was founded, the Ludwigshafen-based company, together with the DING3000 design studio, developed a state-of-the-art concept bicycle made almost exclusively of modern plastics from BASF. The front and rear lights installed here were realized with the M-Tube system by MENTOR and clearly show the advantages of a flexible light guide system.

BASF also developed the concept refrigerator CoolPure 1.0, again the design was realized by the flexible light guide solution. The concept was realized with the M-Tube system by MENTOR.. 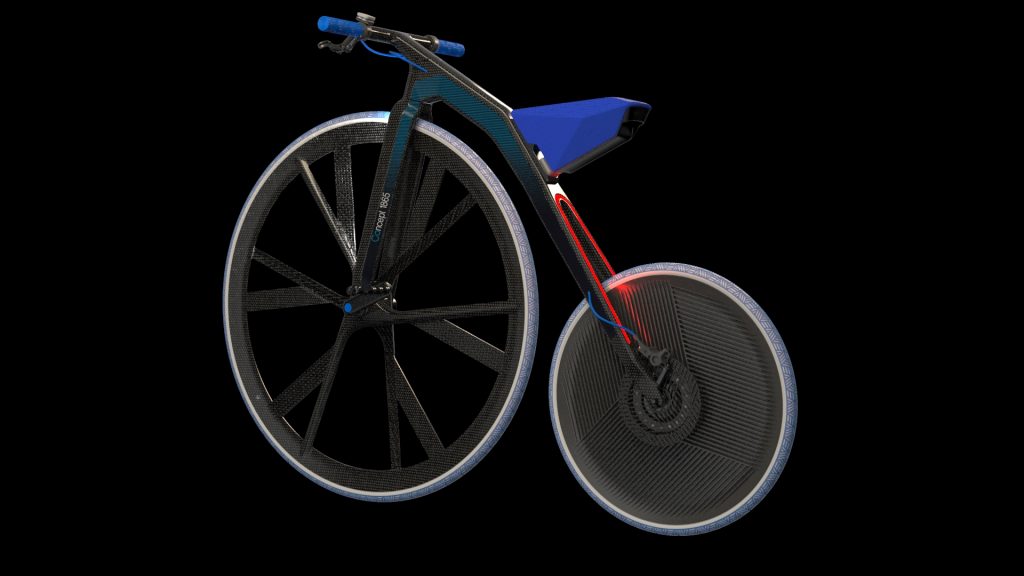 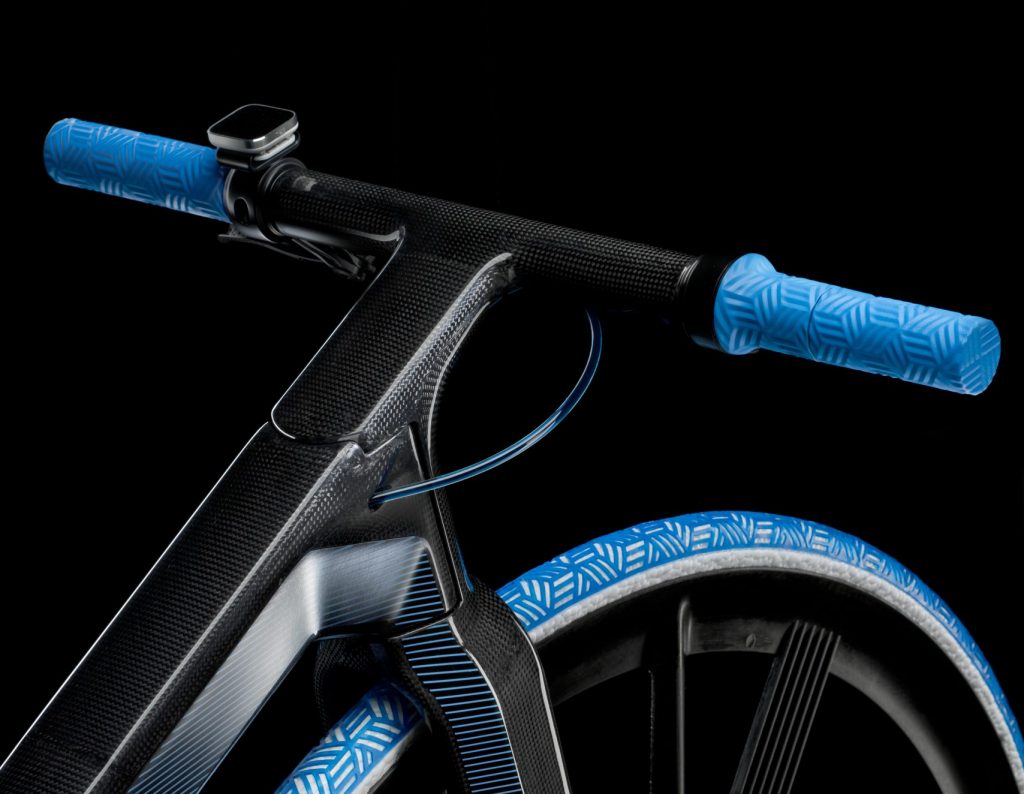 Kärcher, world market leader for cleaning equipment and systems, offers a much greater product range than high-pressure cleaners only. With the new WPD 100, 200 and 600 water dispensers, the company introduces innovative and environmentally conscious beverage systems. Kärcher relies on the individual lighting solutions by MENTOR. The light module features only 2 LEDs and was developed especially for Kärcher. In addition to casting a nice ambience lighting it also serves as visual indication for hot water. 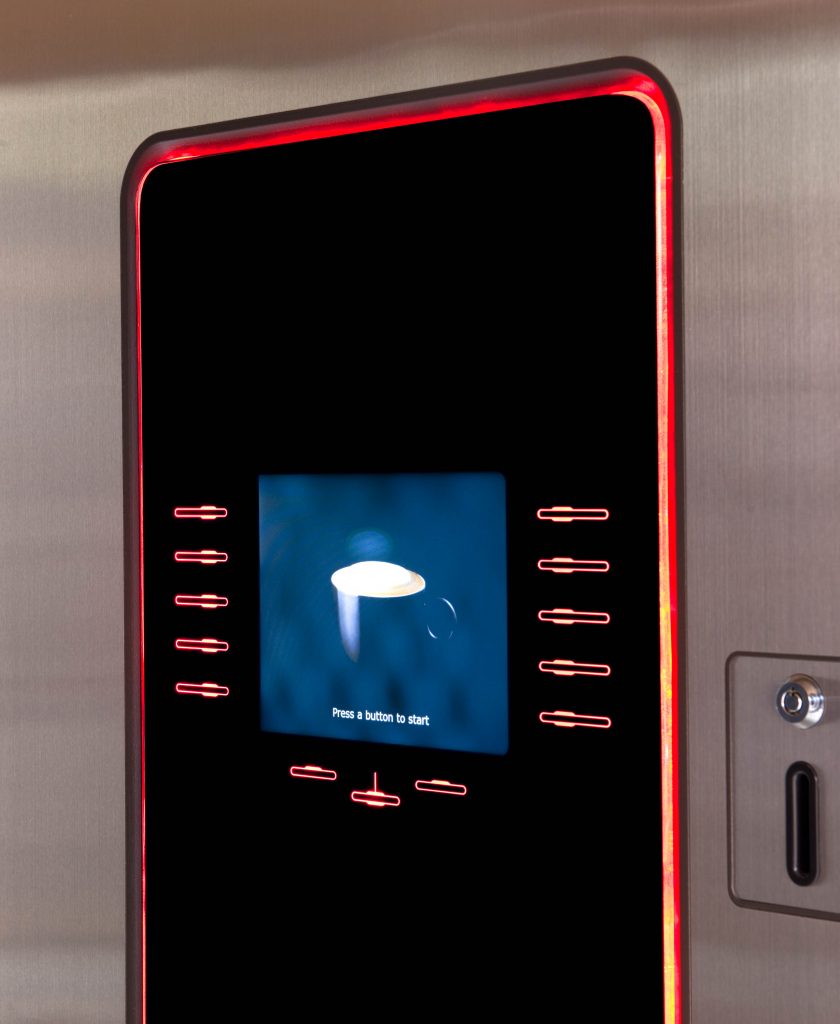 As one of the world’s largest full-service providers, Crane Merchandising Systems has been manufacturing high-quality and technologically advanced vending machines for the supply of beverages, snacks or confectionery for more than 80 years. In a vending machine for hot drinks developed for Autobar (now Pelican Rouge), a flexible light guide from the M-Tube series sets special accents and perfectly underlines the modern design of the device. 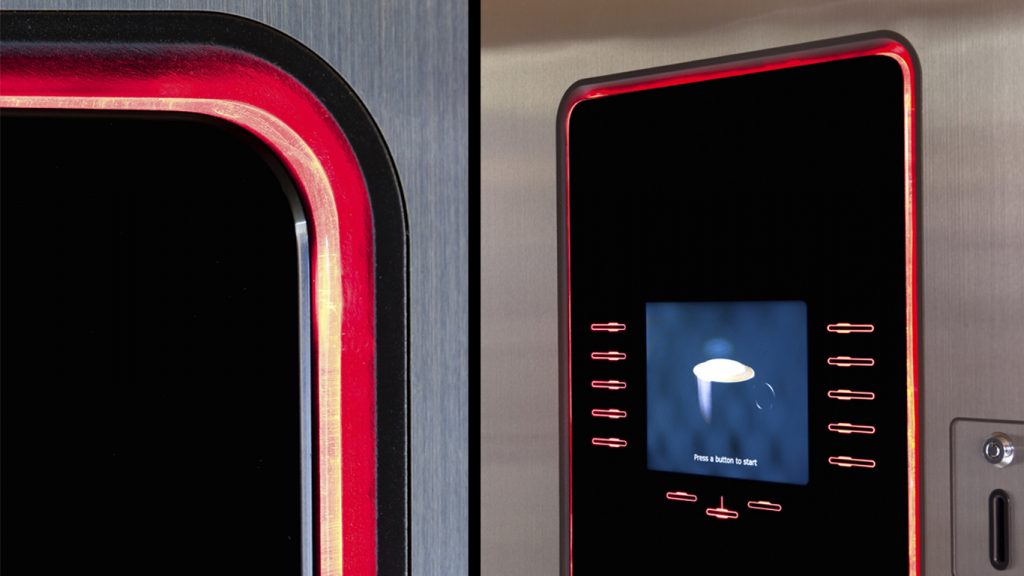 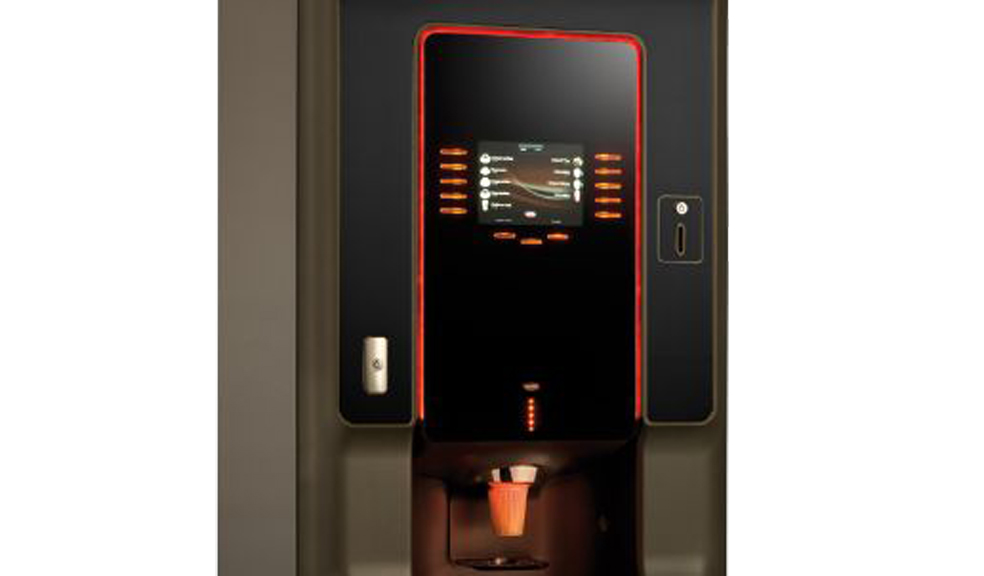 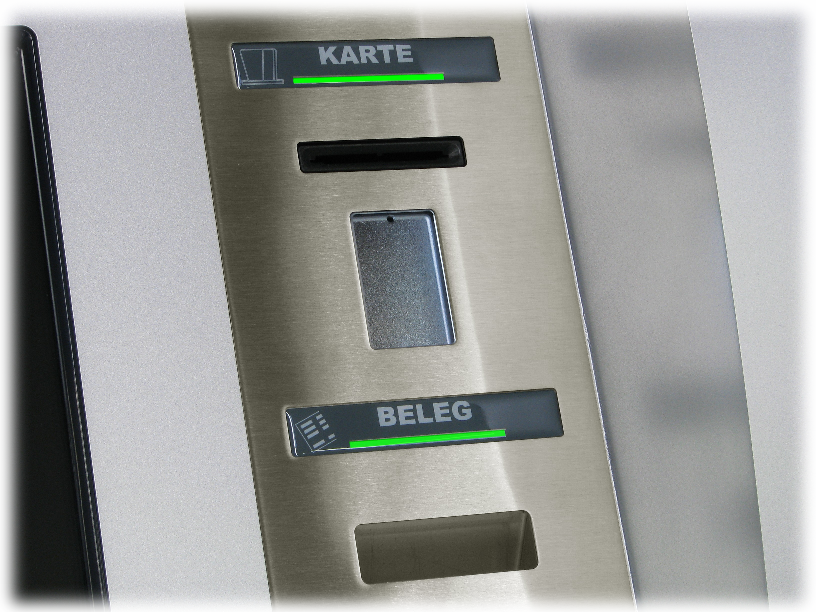 Standardwerk Eugen Reis GmbH develops and manufactures cash machines, among other things. MENTOR produces the light panel made of PMMA for these self-service machines. 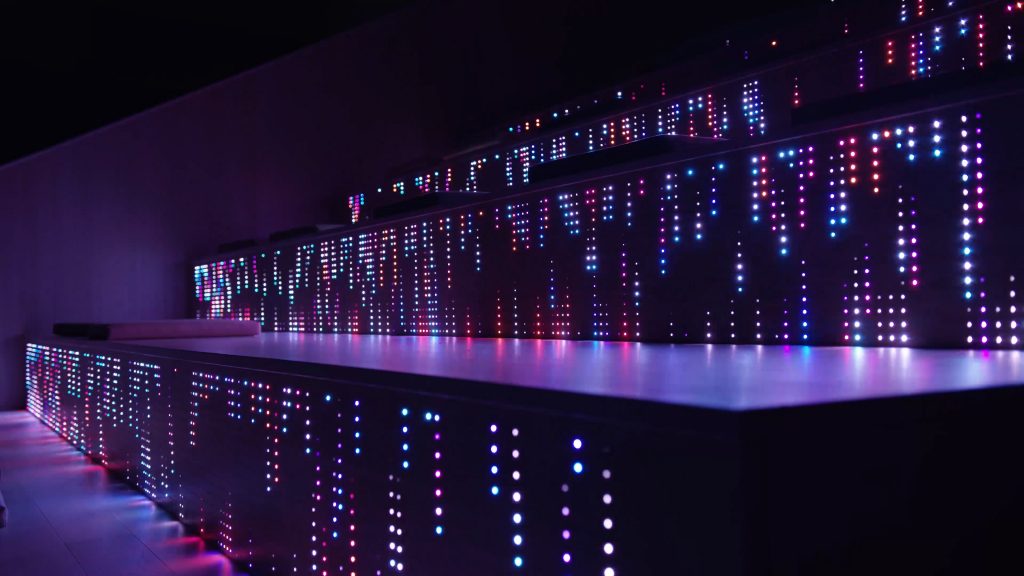 The Norwegian company Evry is known as an international IT company. The company also presents itself outwardly as modern and design-oriented, so when redesigning the company’s Stockholm branch, the emphasis was on a stylish ambience. For the lighting and setting the scene for a staircase, light guides from the 1282 family were used. How the VOID design office implemented design with standard components, you can see in this film. 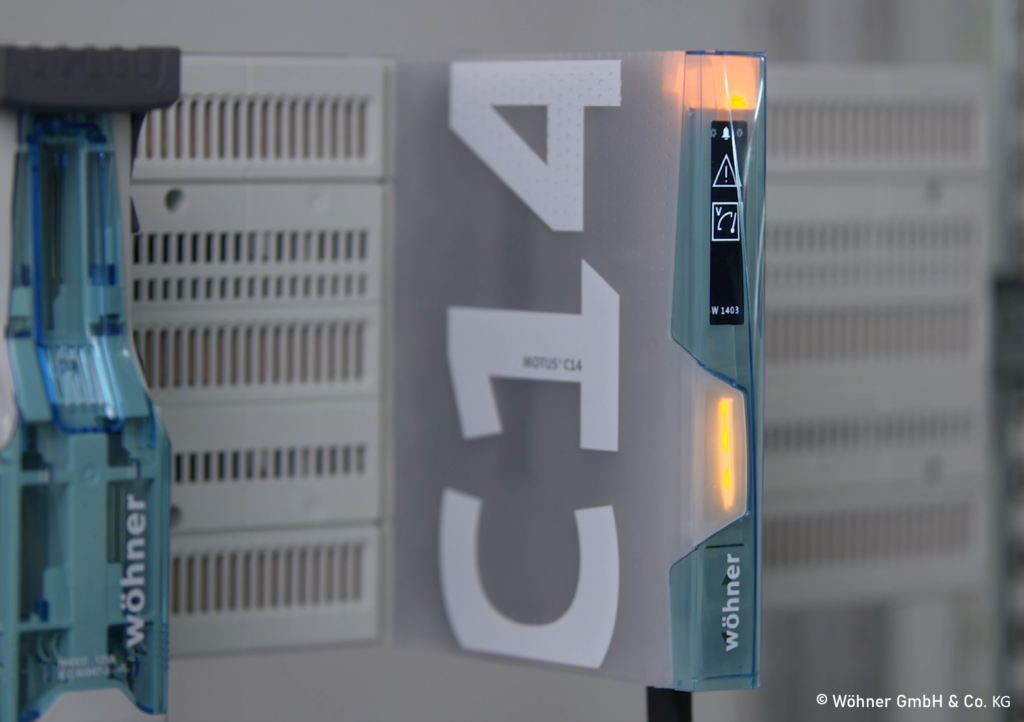 Wöhner has been developing intelligent and innovative solutions in the electrical engineering sector for over 90 years and is an internationally recognised partner in the fields of control technology, energy distribution and renewable energies. With its MOTUS® C14, the family-run company based in Rödental in Upper Franconia has developed an electronic motor starter that provides the highest standards of intrinsic safety and can also be switched back on following a short circuit. What’s impressive about the MOTUS® C14 is its especially slim design, simple operation and intuitive menu navigation.

An integral part of the interactive operating concept is the main button that is supplied by MENTOR with an integrated light guide – consisting of a mixing and fuser unit that ensure the light is fed evenly into the light guide, and an assembly aid for the display and arrow buttons. The main button indicates different device statuses by using colour coding. For example, a white LED indicates that the device is ready for operation, while a green LED indicates that the motor is running. If the LED on the main switch is yellow, this indicates a warning state. If it is red, there is a fault. The similarly illuminated arrow buttons, for which MENTOR provided two moulded parts, are used for the guided start-up of the device and entering the required parameters.

A particular challenge when developing the lighting design solution was the semi-transparent housing of the device, which is also illuminated for varying status indicators. With a two-component moulded part, the light ray is separated in the main button from the remaining environment and protected from overexposure in the housing.

The Italian company DIXELL belongs to the American Emerson Climate Technologies Group and is one of the leading suppliers of controllers for refrigeration, air conditioning and kitchen technology. The XWeb module T620T-100W0 relies on the possibilities of MENTOR’s customized light guides. By means of a very flat light guide, specially developed for Dixell, states are displayed here with an appropriate background lighting. 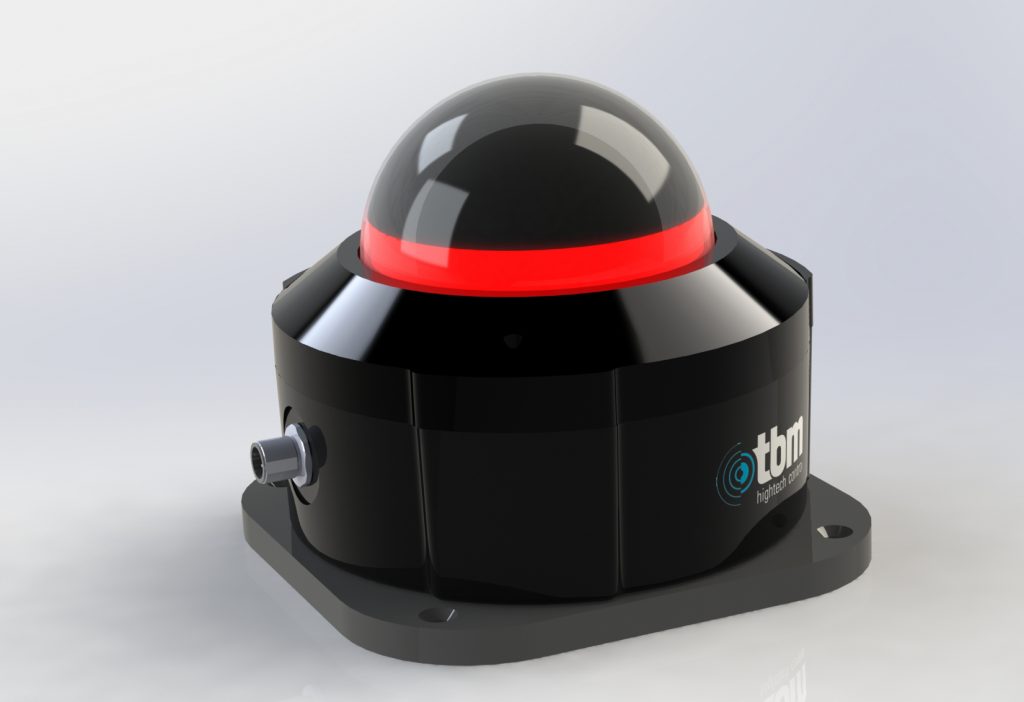 Safety in the warehouse is an important issue. The NoColl-Dome from tbm hightech control enables order picking in accordance with standards and regulations by automatically controlling the speed of warehouse vehicles and also monitoring traffic. The NoColl Dome communicates by means of a light signal. For this purpose, a customer-specific 2D light guide was developed.